To the end of Garrel

The Garrel was first mentioned to us by Jean Tarrit back in 2011. He told us of a sump that was at the end of a cave that the CLPA had been exploring for over 30 years. It’s a big, complex cave system and continues to lead dry passageway even today. However, what lay beyond the sump was a mystery to them, and could be the start of another significant area of the cave so he was keen for us to dive it. In 2012, Christine and Tim dived and laid 40m of line, finishing as the visibility was deteriorating. The sump had gone to a depth of 10m, and was heading up towards the surface at a depth of 4.5m at the end, so there was a good chance it would surface.

We returned this year with thoughts of surfacing into new cave passageway, and were very excited to going back. It doesn’t seem too bad a dive, to be honest. 90m of distance, and 10m depth. How hard could it be? Well, the cave diving is the easy bit. You see the sump is 6 hours caving from the entrance. It isn’t particularly difficult caving, lots of short vertical climbs and descents, and a particularly big and confusing boulder choke in the middle of the trip. All of this needs to be done of course with the diving gear. Jean brings friends with him. They are never the same people, for some reason, so I can only assume he has a large pool of friends to draw from.

We set off early that morning, and no less than 8 cavers showed up to help us. Jean was so excited, that he left all of his equipment at home and had to go back to get it. He caught us up a couple of hours into the trip. These helpers were young, fit and keen. At the start anyway!

I’ve been trying to find the report of the last trip here, but I can’t. I suspect that, in the way that you forget pain, the interwebs has decided that the report is too painful to be told. It just means I’ll have to recant the story here for you. (Edit: It's here: A Grand Day Out Chris ;-))
We climbed into the cave down a sloping, low bedding plane just steep enough for you to not have to work very hard. This is great on the way in, but I’m always mindful of how I might extract myself from such places. I slid down to the bottom, thinking about levitation techniques. From there on, it’s a mixture of short rope pitches. We used SRT equipment this time. In 2012 we neglected to bring any because it was a “short, easy trip”. 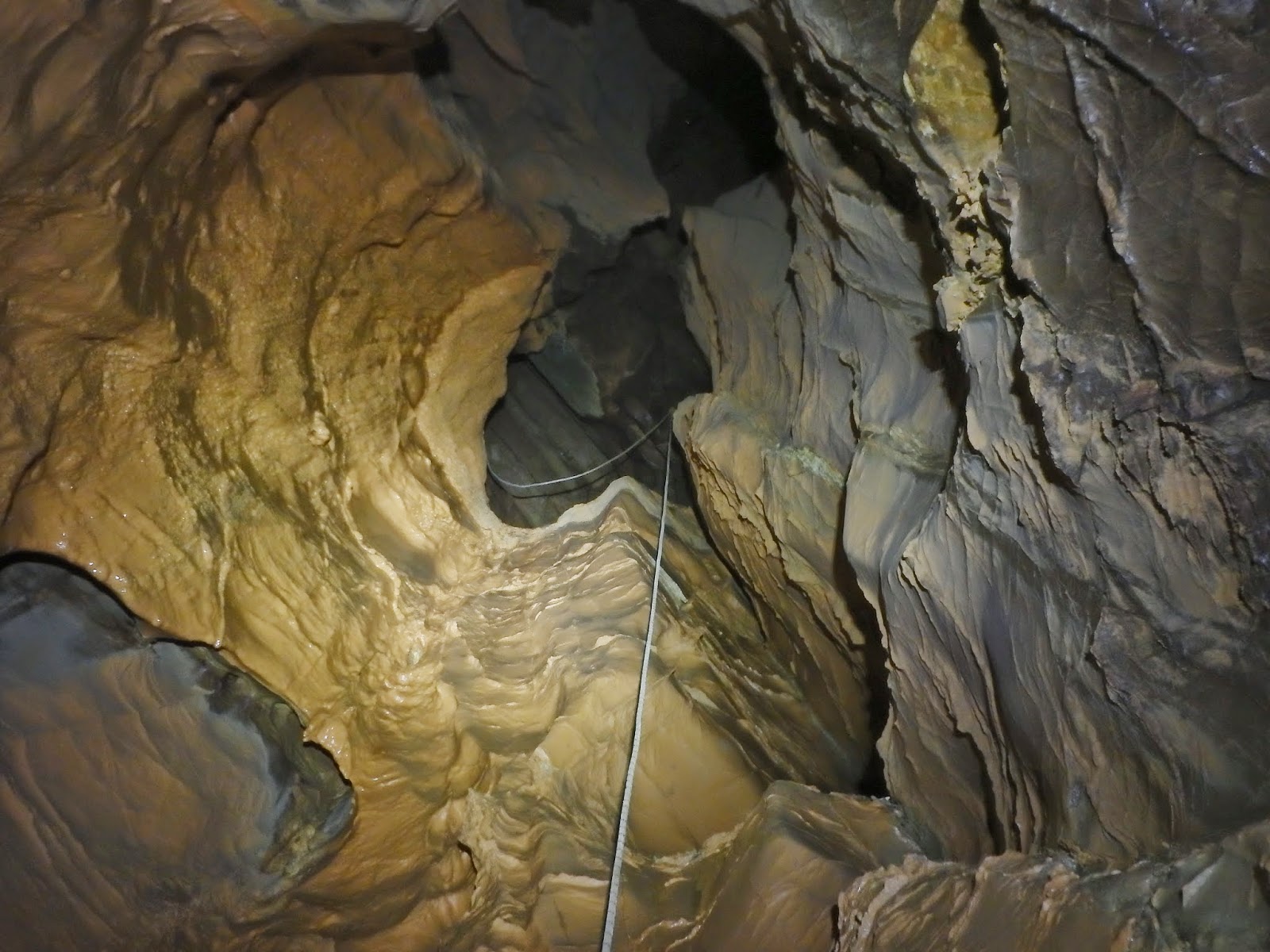 After about an hour, or so, the large passageway stops at the base of a huge boulder choke. There are multiple ways into it. We’d become spread out over the cave due to the vertical pitches, and I found myself with a young french guy who spoke about as much English as I spoke French. You can make what you will of that, but essentially, unless we wanted to ask each other our respective names for the next few hours, and discussing whether there is a monkey in the tree or not.  Anyway, I digress. My new friend decided that the way on was up and to the left. Well, it was his cave so I followed him. Climbed up a squeeze little hole, and then to a vertical rope pitch. There was nobody there, and I figured that if this was the way on, then we would have caught up the other team at this point. I tried to explain that we needed to go back to the bottom of the boulders and wait. OK, he said, I went down, and he went up. Le singe est sur l’arbre. I got found by another of the party and tried to explain. I think we made some progress, and we shouted at friend 1 to come back, which he duly did. This whole escapade took us a good 45 minutes, and we headed on through the boulder choke and caught up again.

More big rooms, vertical climbs and descents, a very precarious totter across a knife-edge of rock like something from Lord of the Rings, 6 hours and a spot of lunch later, we arrived at the sump. This was a beautiful sight. It had a gorgeous green hue to it, and we could see the line heading off into the depths. That was until I fell in kitting up. Brown soup from all of the fine silt was now covering the entrance. I just hoped it wouldn’t drift into the main cave. We were planning to survey this sump, so visibility was needed in order to do a decent job. 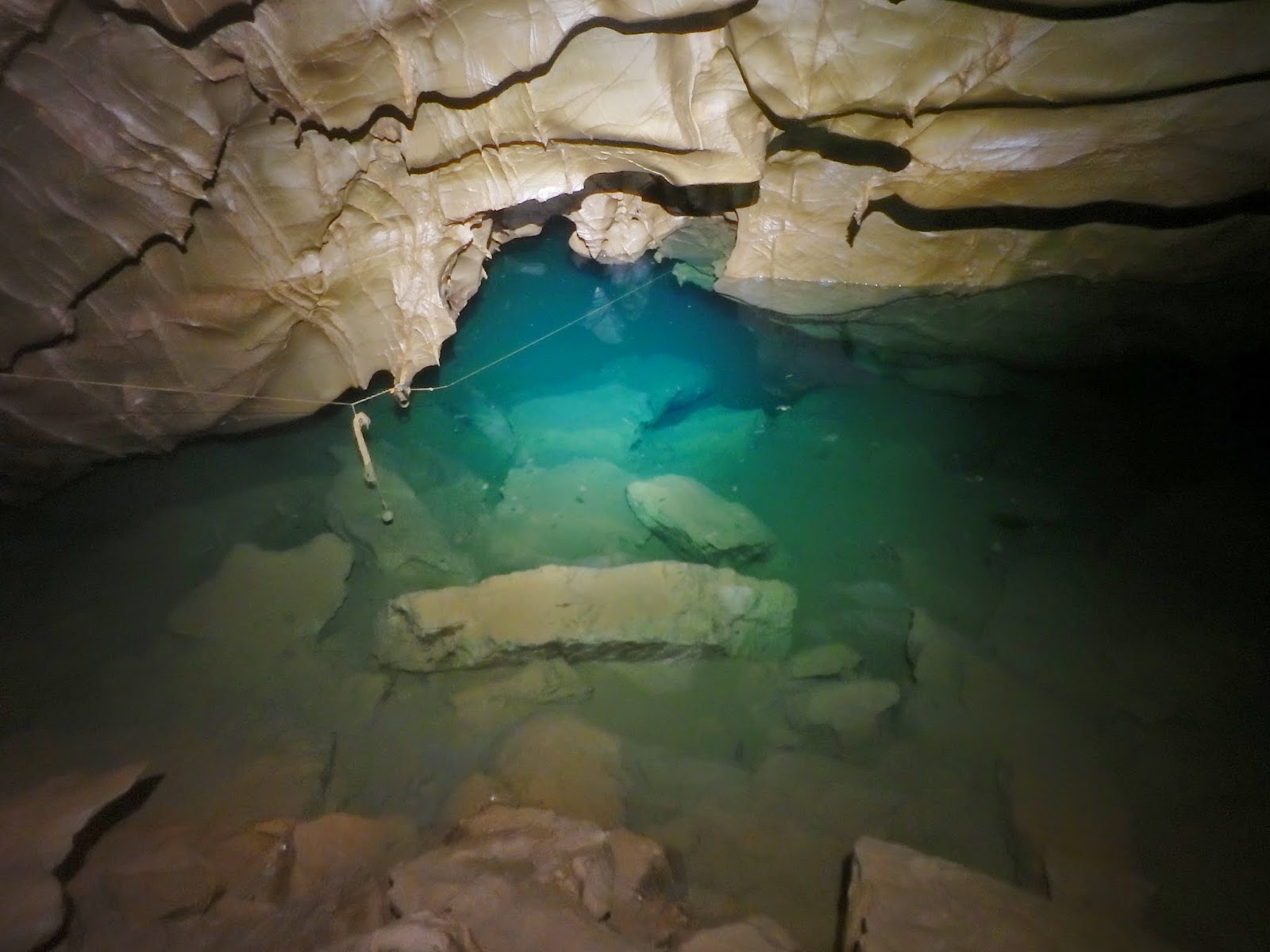 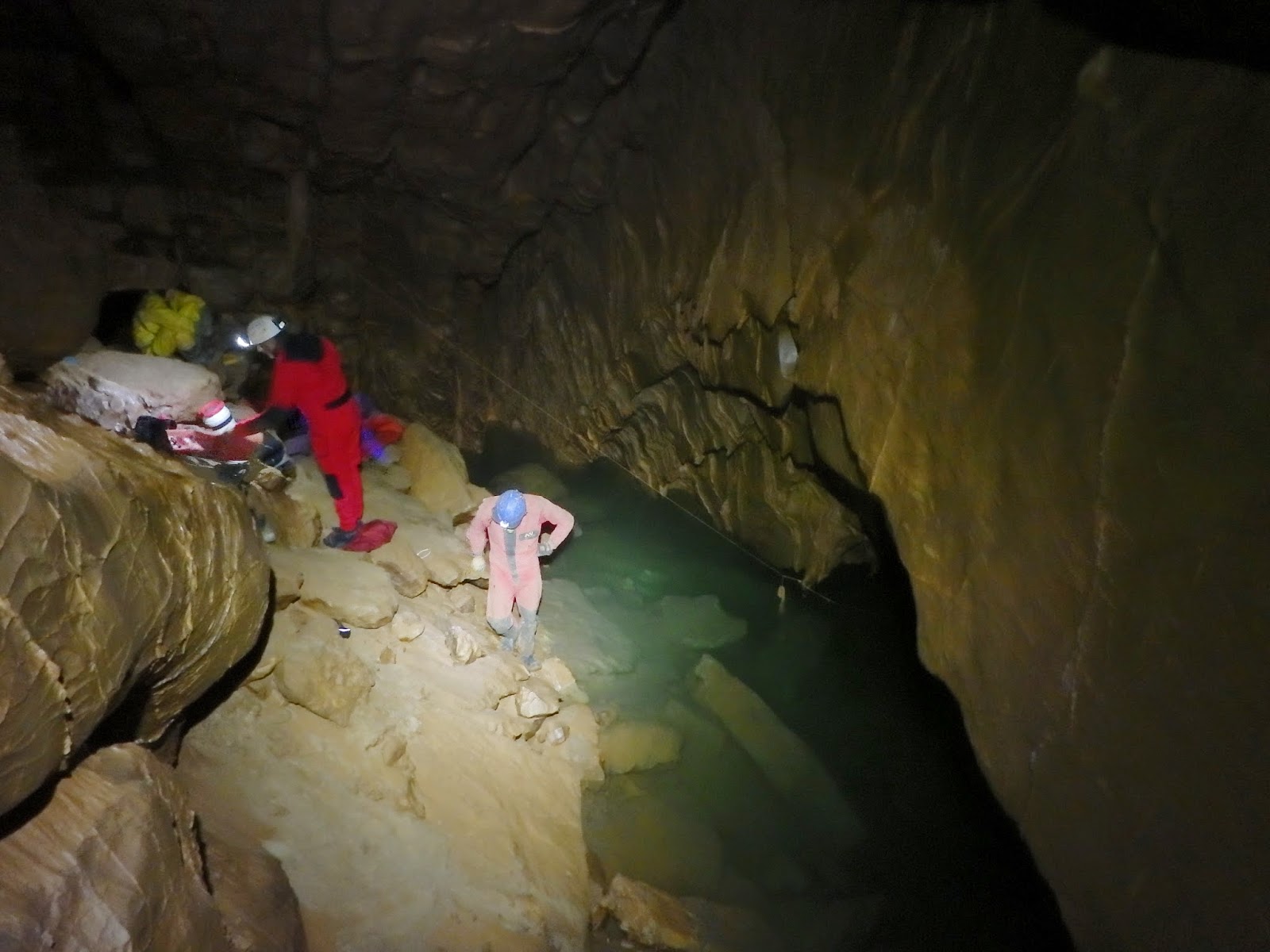 After some precarious balancing while gearing up, Christine and I set off into the sump. Chris went first, patching the line and looking around for the way on. I followed behind making the survey. Pretty little cave, although I didn’t get to see too much of it, focussed as I was on my compass and wet-notes. The passage went roughly North West, and I surveyed the length of the line, and having a quick discussion with Chris at the end to the effect of “it’s all boulder choked from here on” and that was sadly the end of the dive. 20 mins in, 20 out and we were back at the pool again. We had the survey, but no new cave unfortunately. This was a great shame, but to put it in perspective, we don’t have to carry 2 sets of diving gear 6 hours into the cave again. Hopefully the survey will point to a way on on the dry side of the cave. That’s where the CLPA come into their own, and they will make good use of the data, I’m sure.

The reverse trip back to daylight (ok, it was 9pm and dark when we got out) was hard going. Bags seem to get heavier, the cave gets smaller, and the climbs more exposed. I guess it’s just the effects of concentrating for 12-13 hours. The levitation on the final slope back to fresh air worked as well as you’d expect, and I slithered my way back up, just like the “worm” dance move. But only with 20inches of vertical space. 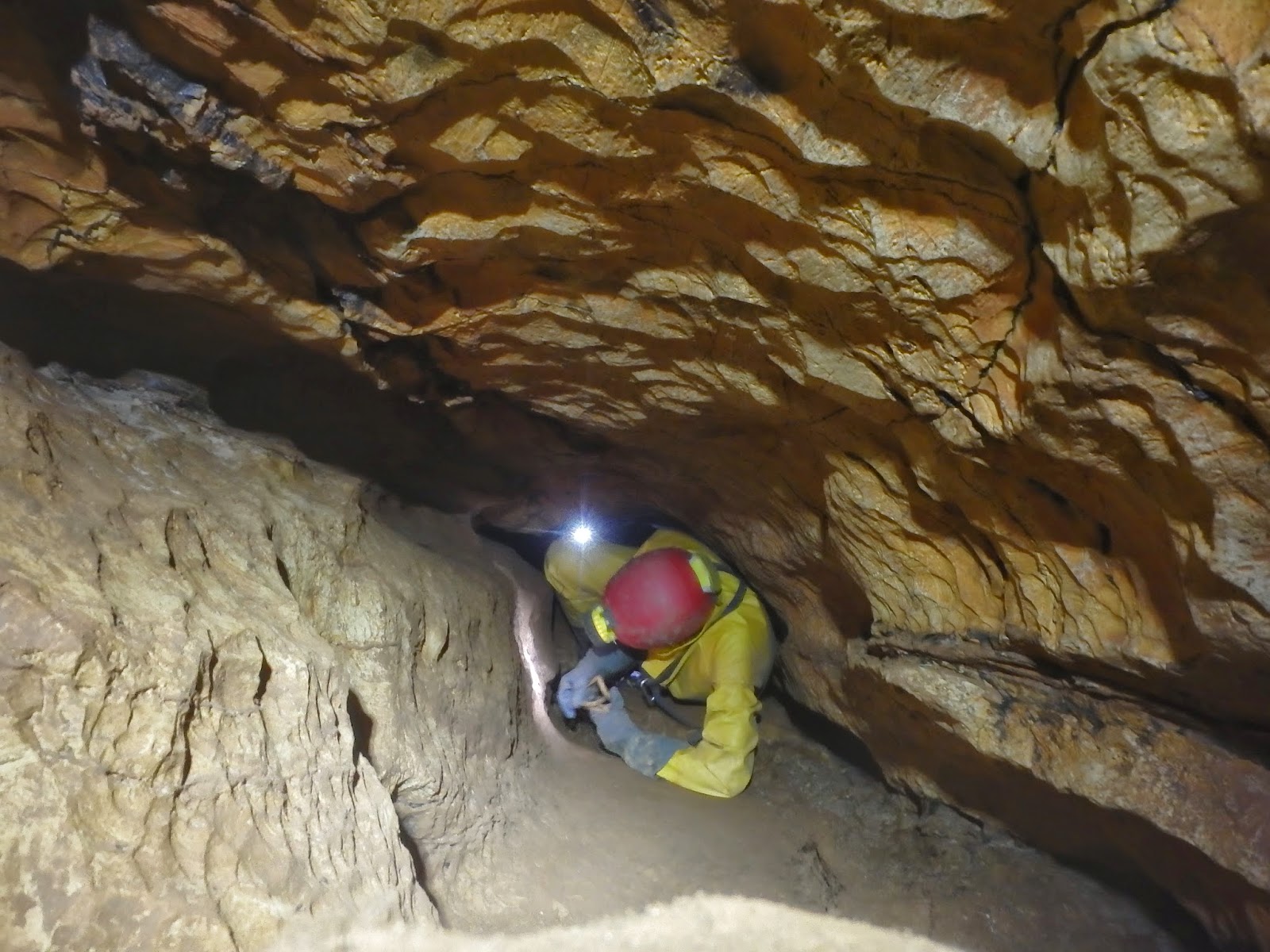 It was an exhausting trip and we all suffered for it for the next 24 hours. We got beer, as always, in the local bar. Fortunately they have an outside terrace as we definitely wouldn’t have been allowed indoors. Our trip formally closed the next evening when we invited all of the team around to the campsite for a BBQ. Spare ribs, sausages, salad, beer, wine, vegetables, lamb chops and moules too was a lovely finish to the week.

Thanks to Jean Tarrit for taking the photos! 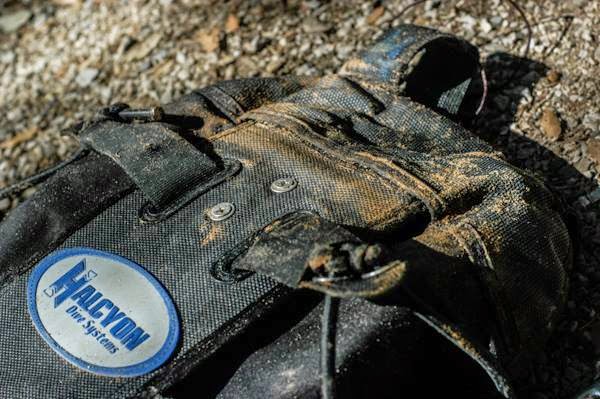 Posted by Rich Walker at 9:07 AM No comments: Links to this post